Google Analytics And Fonts Are Probably Costing You In Sales

Google Analytics is not free

Firstly, let me start by saying that Google Analytics and Google Fonts are amazing services. They are both incredibly well made, do an excellent job and are, in my opinion, better than alternatives at what they do.

However, they are by no means free. They are free services to use, but if you run a website, you are paying for them by giving Google data about your customers.

When you run Google Analytics (and to a lesser extent, Google Fonts and Google Tag Manager) on your website, Google knows that your prospective customer was on your site. And, as you know by looking at your Analytics Dashboard, Google also knows exactly which page they were on.

Google makes money from targeted advertising. It makes money by knowing about people browsing the web and showing them relevant adverts, getting money from those advertisers.

Google is Tracking Your Customers

In practical terms, this means that if you have a business selling, let's say, hotels in France, and your website is running Google Analytics (or any other Google service), Google knows that your prospective customer is interested in booking a hotel in France the second they visit your website.

When that customer leaves your website, and visits a website which has Google powered advertisements, it will show them advertisements for your competitors offering hotels in France (or possibly your own adverts if you are paying for AdSense).

You might be paying for Google Analytics by giving your customers to your competitors via advertisements.

In theory, this is how Google makes money. To prove my point I devised an experiment to test this for myself. I set out to browse some websites that use Google Analytics (or other Google services embedded into the webpage) then view a website that had Google ads, and see if they served me ads related to what I was just looking at.

The first thing I wanted to do is make myself as unknown as possible to Google. I used Firefox instead of Chromium (which I normally use). I cleared all my cookies and browsing data.

It's possible that google can still track me by my IP address, but that doesn't matter too much for this test.

To rule out any previous knowledge Google may still somehow have of me, I viewed sites about a topic I know nothing about but I thought would still be heavily advertised via adsense: Football boots.

In my completely clean Firefox browser session, I went to Bing.com and typed in "Nike football boots". Obviously if I had chosen to use Google's search for this, they would immediately know I was looking up football boots and my test would be invalid.

I visited the first 3 websites on the list (kitbag.com, jdsports.co.uk and sportsdirect.co.uk). For each of the three websites I opened the first page, clicked on the same product *Nike Mercurial*, viewed the page for a few seconds, went back to the search results page, chose the next link and repeated the process. Typical behavior for someone who was comparing the price of the boots at different stores.

I then visited a website which I know has Google ads but has no connection to football boots or sports equipment, phoronix.com, a website focused on hardware performance on the Linux operating system. 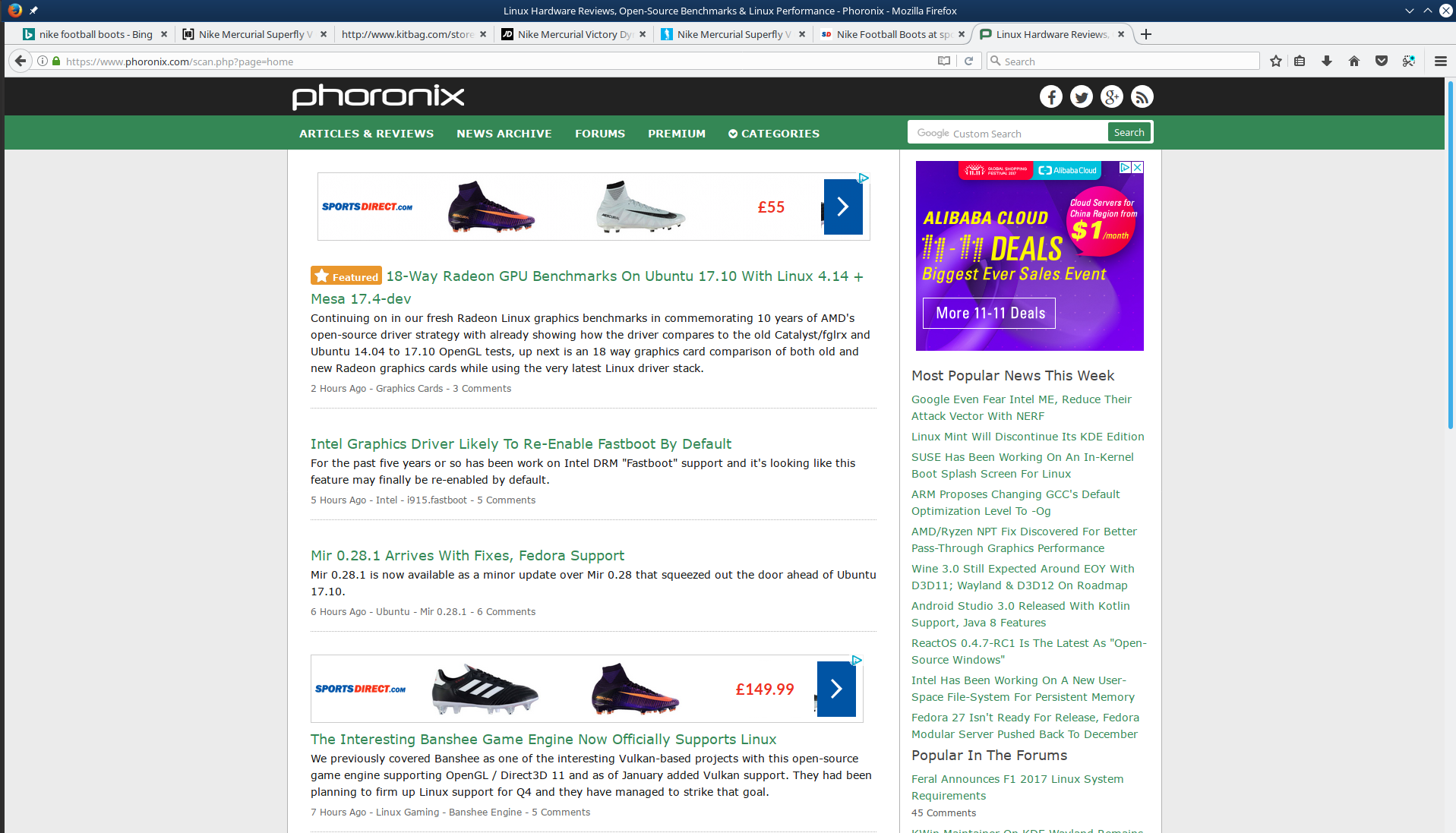 This screenshot speaks for itself. Those white boots in the middle of the top banner are the exact boots I looked at on each of the three websites. Maybe those particular boots are just incredibly popular right now, maybe I saw those boots for a reason (as I said, this is completely outside my area of expertise).

I have never knowingly used a single Google service here, and I specifically avoided searching on google.com, yet Google was still tracking me.

It was able to do so because each of the three sites I used uses Google services. Between the three sports equipment sites I visited, they use Fonts, Analytics and Tag Manager. By having these services embedded on the businesses' page, Google was able to track me and my interests.

Maybe your customer bookmarked your page or still has it open in another tab but maybe it's a few days later and they've forgotten all about you when they see your competitor's advert after payday.

Is Running Google Services on Your Website Compromising Your Sales?

Whether this directly impacts your sales will depend on the nature of your website, the market you are in and how loyal your customer base is, but it's certainly worth considering before blindly using "free" Google services on your company website.

On the other hand, insights you get from Google Analytics might give you a net gain overall and offset the cost of any potentially lost customers.

You might consider removing all Google services from your own website to try to prevent this problem but here's the kicker, if that customer reached your website from a Google search, Google already knows what they're interested in and can still display the advert.

By including Google services on your business website you are increasing the chances that your potential customers will see very finely tuned and targeted advertising, down to the product they were viewing, directing them to your competitors websites.

If you have a business website, you might want to consider removing Google services for a month or two and seeing how it affects sales trends. The worst that will happen is you'll lose a few months of analytics and you'll understand exactly what the services are costing you.